In the 22nd Century, Ray Peterson, reporter for the Interplanetary News, is assigned to write a story aboard a space station. Tension mounts between Peterson and the station's ommander, who think he's in the way, but has orders to leave him alone. Errant spaceship, Alpha Two enters the solar system and its photon generators are radiating enough heat to destroy Earth as it approaches. It falls to Peterson to try to figure out a way to enter the spaceship, disarm the generators, and escape before suffocating.

Space-Men (a.k.a. Assignment: Outer Space in the United States) is a 1960 Italian science fiction film directed by Antonio Margheriti. The film stars Rik Van Nutter and co-stars Gabriella Farinon, David Montresor, Archie Savage, and Alain Dijon. The film was released in the United States in 1961 by American International Pictures.

Space-Men’s storyline recounts a mission in the 22nd century aboard an orbiting space station. The mission involves a risky effort by its crew to redirect a malfunctioning spaceship that threatens to destroy the Earth.

Plot
In 2116, Interplanetary Chronicle of New York reporter Ray Peterson (Rik Van Nutter), launches aboard spaceship Bravo Zulu 88, joining the crew of an orbiting space station. Peterson is assigned to write a story about the “infra-radiation flux in Galaxy M12”, but soon tension develops between Peterson and the station commander (David Montresor). He believes the reporter is in the way, calling him a “leech”, but he has orders to not interfere with Peterson. A complication arises when Lucy (Gabriella Farinon), the station botanist and navigator, becomes attracted to both the commander and Peterson.

With both crew members now dying from their attempts, Peterson uses Space Taxi B91 to get aboard the errant spaceship. His goal: to disarm Alpha Two’s photon generators. Once inside, he is directed to disable the spaceship’s computers and shut down all power sources. He soon finds himself trapped inside when the emergency hatch is also disabled by the power loss.

Despite orders from the high command not to intervene, the commander and his assistant disobey and attempt to intercept the out-of-control Alpha Two and rescue Peterson. They are finally able to reach the reporter as he is collapsing and bring him back safely. With Alpha Two now safely redirected away from the Earth, Peterson wins Lucy’s affection and the commander’s respect for his heroic actions.

0
Be the first to review “Assignment: Outer Space” Cancel reply 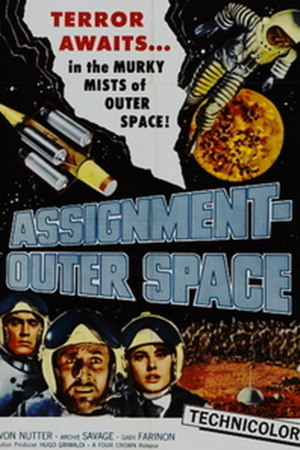