A lawman who survived a wagon train massacre as a child trails an outlaw who might be his long-lost brother.

Branded a Coward is a 1935 American film directed by Sam Newfield. it was the first of Johnny Mack Brown’s Westerns made for producer A.W. Hackel’s Supreme Picetures.

Plot
Safely from behind some shrubbery, Johnny Hume, a boy of 6 or 7, witnesses the slaughter of his mother, father and brother by the guns of a gang led by “the Cat”. Twenty years later finds Johnny grown to manhood, an expert bronc rider and target shooter – but paralyzed with fearful memories in an actual gunfight. This is brought home to him when some outlaws stick up the local saloon and Johnny ends up cowering behind the bar. Accompanied by his sole pal, stuttering Oscar, Johnny hits the trail in shame. Along the way, he encounters a stage holdup and snaps out of his fear long enough to plug a couple of the highwaymen, chase the rest away, and wrest the runaway coach from a final thug. Aboard the coach is Ethel Carson, most grateful for Johnny’s bravery. Johnny takes the stage on to Lawless, Arizona, where Ethel, the wounded stage driver and, worst of all, Oscar extol his prowess as a gunman. As a consequence, he’s offered the job of marshal, which resurrects all his fears – until he learns that the stagerobbers, who have been terrorizing the area, are run by a new, unknown boss emulating (down to using his name) the viciousness of ‘the Cat’. Complicating matters, Ethel’s father despises Johnny whose father, a lawman, killed his brother during a ruckus.

0
Be the first to review “Branded a Coward” Cancel reply 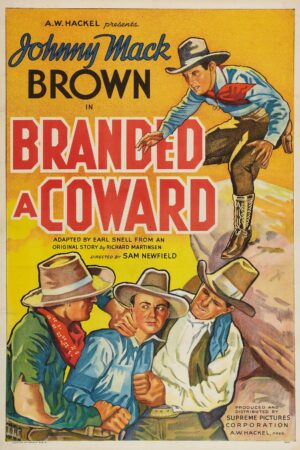