194765 minAction, Crime, Mystery, Thriller
+ Playlist
Sign in to add this movie to a playlist.
0

A gang of criminals, which includes a piano player and an imposing former convict known as 'Gruesome', has found out about a scientist's secret formula for a gas that temporarily paralyzes anyone who breathes it. When Gruesome accidentally inhales some of the gas and passes out, the police think he is dead and take him to the morgue, where he later revives and escapes. This puzzling incident attracts the interest of Dick Tracy, and when the criminals later use the gas to rob a bank, Tracy realizes that he must devote his entire attention to stopping them.

Plot
Just out of jail, Gruesome (Boris Karloff) goes to the Hangman’s Knot saloon, where his old crime crony, Melody (Tony Barrett), is now playing piano. Gruesome takes him to a plastics manufacturer, where X-Ray (Skelton Knaggs) and a mysterious mastermind are in possession of a secret formula and hatching a sinister plot.

Ignoring a warning not to touch anything, Gruesome sniffs the gas from a mysterious test tube; he escapes the toxic fumes but collapses upon returning to the Hangman’s Knot and is taken to the city morgue, where his body stiffens dramatically.

Dick Tracy (Ralph Byrd) is at headquarters speaking with college professor Dr. A. Tomic (Milton Parsons), a scientist who suspects someone has been following him. At the morgue, Tracy’s sidekick Pat (Lyle Latell) has his back turned when Gruesome wakes up and knocks him out. Pat describes him to Tracy as looking a lot like the actor Boris Karloff (a gag cribbed from Arsenic and Old Lace).

At a bank where Tess Trueheart (Anne Gwynne) happens to be, Gruesome and Melody drop a grenade with the gas into a wastebasket; when it goes off, everyone but Tess freezes in place. They rob the place of more than $100,000 and shoot a cop on the sidewalk before Tracy and his men arrive. Gruesome demands half of the loot from X-Ray …. or else.

Tracy tries to learn the secret of the formula from Dr. Tomic’s top assistant, Professor Learned (June Clayworth), before going after Gruesome and his gang. Over the course of the film, Learned is shot dead, and Melody dies in a car accident. As an offhand comment, Tess quips “dead men tell no tales,” which gives Tracy an idea: since Gruesome will resort even to murder to keep his secret weapon a secret, if he thinks Melody is alive, he will hunt Melody down to prevent any leaks. Tracy decides to run a false flag operation: put out word that Melody has been captured alive, and pose as Melody hoping Gruesome will show up. Gruesome takes the bait and abducts what he thinks is Melody from the hospital. In a climactic shootout at the plastic factory, Tracy shoots Gruesome in the back.

Tracy retrieves one last gas grenade with the intent of analyzing the contents. Back at the office, in the closing scene, the grenade inadvertently goes off, freezing everyone in place just as Dick and Tess are about to kiss. 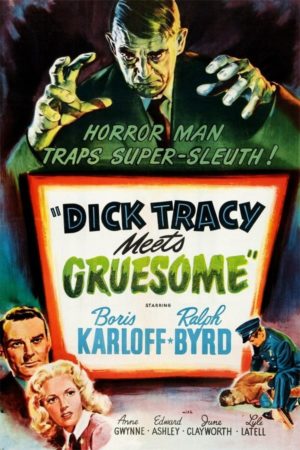