A salesman tries to sell a tractor to a customer who hates tractors while falling for the girl.

Earthworm Tractors is a 1936 American film directed by Ray Enright and starring Joe E. Brown and June Travis. The film is also known as A Natural Born Salesman in the United Kingdom.

The film is based on characters created by William Hazlett Upson in a series of stories that appeared in The Saturday Evening Post. The series featured Alexander Botts, a natural-born salesman, and the Earthworm Tractor Company, and was inspired in part by Upson’s actual work experience with the Caterpillar Tractor Company.

Plot
In this slapstick romantic comedy, Alexander Botts is egged on by his sweetheart Sally to do great things, so he writes a letter to the Earthworm Tractor Company, and is hired as a salesman. He gets fired more than once, but is rehired by getting orders. He falls in love with Mabel, daughter of cranky Sam. Eventually, he proves a super salesman by selling many tractors to Sam, and wins Mabel’s love.

0
Be the first to review “Earthworm Tractors” Cancel reply 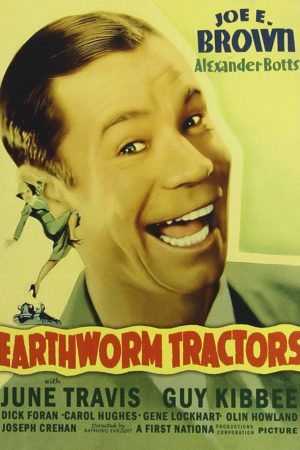