Problems develop when a girl borrows money from a friend so that she can impress a wealthy man who wants to marry her.

Plot
When Mary Beekman (Irene Ware) loses her waitress job, after a fight with her loutish boyfriend, trucker Mike O’Reilly (Edward Gargan) she stands at a bridge on a windy night, losing her pay check through a windblown and leans over the guardrail of the bridge to catch it. Socialite Kenneth Alden (Sidney Blackmer) catches her, thinking she wants to jump the bridge. He’s lost everything that is not already mortgaged. Both down on their luck, they assume that the other is there to jump off the bridge.

Instead, Mary has an idea. If Ken sells shares to a syndicate of his wealthy friends, in a phoney beauty product, they’ll have enough money for some clothes to pass Mary off in society, long enough to meet and marry a wealthy bachelor. Then, they can pay everyone back, with interest. The con might work, except that Ken has too much integrity to marry for money to Clarissa (Betty Compson) (whom he loves for years), and Mary is beginning to see his point when she falls for Pat (Russell Hopton), who has secrets of his own.

The plot boils over when Mike shows up to blow the lid off. Pat’s valet is a thief, who promised not to act foolishly. But he escapes with a stolen Tiara. Meantime Mary thinks to leave as things do not work out, so she shares the taxi to the station with Pat’s valet escaping with the Tiara. After a police chase, Mary is hauled off to the station.

It looks like no one is going to end up with anything, but a bad reputation; but, it’s not over yet, in this curious, romantic comedy, about the social set, in 1930’s America, from Chesterfield films.

0
Be the first to review “False Pretenses” Cancel reply 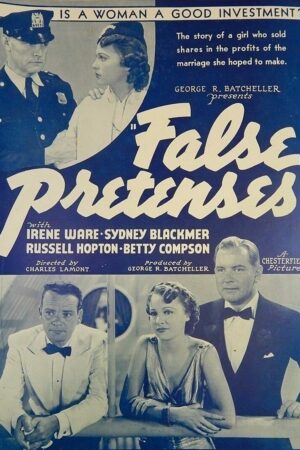