A starship crew goes to investigate the silence of a planet's colony only to find two survivors and a deadly secret that one of them has.

Forbidden Planet is a 1956 American science fiction film, produced by Nicholas Nayfack, directed by Fred M. Wilcox, that stars Walter Pidgeon, Anne Francis, and Leslie Nielsen. Shot in Eastmancolor and CinemaScope, it is considered one of the great science fiction films of the 1950s, a precursor of contemporary science fiction cinema. The characters and isolated setting have been compared to those in William Shakespeare’s The Tempest, and the plot contains certain analogues to the play, leading many to consider it a loose adaptation.

Forbidden Planet pioneered several aspects of science fiction cinema. It was the first science fiction film to depict humans traveling in a faster-than-light starship of their own creation. It was also the first to be set entirely on another planet in interstellar space, far away from Earth. The Robby the Robot character is one of the first film robots that was more than just a mechanical “tin can” on legs; Robby displays a distinct personality and is an integral supporting character in the film. Outside science fiction, the film was groundbreaking as the first of any genre to use an entirely electronic musical score, courtesy of Bebe and Louis Barron.

Forbidden Planet’s effects team was nominated for the Academy Award for Best Visual Effects at the 29th Academy Awards. In 2013, the picture was entered into the Library of Congress’ National Film Registry, being deemed “culturally, historically, or aesthetically significant”. Tony Magistrale describes it as one of the best examples of early techno-horror.

Plot
In the 23rd century, the starship C-57D reaches the distant planet Altair IV to determine the fate of an Earth expedition sent there 20 years earlier. Dr. Edward Morbius, one of the expedition’s scientists, warns the relief ship not to land, saying he cannot guarantee their safety, but C-57D Commander John J. Adams ignores his warning.

After landing, Adams and Lieutenants Jerry Farman and “Doc” Ostrow are met by Robby the Robot, who transports them to Morbius’ residence. Morbius describes how, one by one, the rest of the expedition was killed by a “planetary force” and that their starship, the Bellerophon, was vaporized as the last survivors tried to lift off. Only Morbius, his wife (who later died of natural causes), and their daughter Altaira were somehow immune. Morbius offers to help them prepare to return home, but Adams says he must await further instructions from Earth.

The next day, Adams finds Farman trying to seduce Altaira; furious, he dresses down Farman and criticizes Altaira for her naivety around the crewmen and what he considers her excessively-revealing clothing. She reports the incident to Morbius, claiming that she never wishes to see Adams again, though she later designs new, more conservative clothing to appease Adams. That night, an invisible intruder sabotages equipment aboard the starship. Adams and Ostrow attempt to confront Morbius about this the following morning. While waiting, Adams goes outside to talk to Altaira. He apologizes for his behavior and they kiss. When they are unexpectedly attacked by Altaira’s pet tiger, Adams disintegrates it with his blaster.

When Morbius appears, Adams and Ostrow learn that he has been studying the Krell, a highly advanced native race that perished overnight 200,000 years before. In a Krell laboratory, Morbius shows them a “plastic educator”, a device capable of measuring and enhancing intellectual capacity. When Morbius first used it, he barely survived, but his intellect was permanently doubled. Morbius takes them on a tour of a gigantic Krell underground machine complex, a cube 20 miles (32 km) long on each side, still functioning and powered by 9,200 thermonuclear reactors, operating in tandem. Afterwards, Adams demands that Morbius turn over his discoveries to Earth. Morbius, however, states that “humanity is not yet ready to receive such limitless power”.

Adams orders the crew to erect a force field fence around the starship to prevent further sabotage. It proves ineffective when the invisible intruder returns and murders Chief Engineer Quinn. Morbius warns Adams of his premonition of further deadly attacks, similar to what happened with the Bellerophon. That night, the invisible creature returns and is outlined in the fence’s force field. The ship’s blaster weapons have no effect and the creature kills Farman and two other crewmen. Morbius, asleep in the Krell lab, is startled awake by screams from Altaira; at the same instant, the roaring creature vanishes.

Later, while Adams tries to persuade Altaira to leave, Ostrow sneaks away to use the Krell educator. He is fatally injured, but with his dying words, Ostrow tells Adams that the great machine was built to create anything from thought alone. He says that the Krell forgot one thing, however: “Monsters from the Id”. Their own base subconscious desires, given free rein and unlimited power by the machine, brought about their quick extinction. Adams asserts that Morbius’ subconscious mind created the creature that killed the original expedition and attacked his crew; Morbius refuses to believe him.

After Altaira tells Morbius that she intends to leave with Adams, Robby detects the creature approaching. Morbius commands the robot to kill it, but Robby knows it is a creation of Morbius’s subconscious mind and shuts down rather than harm him to stop it. The monster melts through the almost indestructible Krell metal doors of the laboratory where Adams, Altaira, and Morbius have taken refuge. Morbius finally accepts the truth. He confronts and disowns the creature, but is fatally injured by the backlash resulting from the confrontation; the Id monster vanishes. Before Morbius dies, he has Adams unknowingly initiate an irreversible chain reaction within the Krell reactors—a planetary self-destruct device—saying that everyone must be 100 million miles out in deep space within 24 hours. At that safe distance, Adams, Altaira, Robby, and the surviving crew watch the destruction of Altair IV. Adams then comforts Altaira by saying that this tragedy will serve as a reminder that, ” . . . we are, after all, not God.” The starship departs for Earth.

1+
Be the first to review “Forbidden Planet” Cancel reply 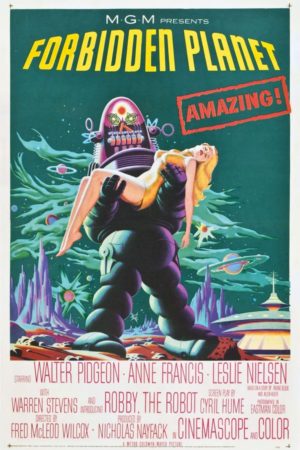