Smash-Up, the Story of a Woman

A successful nightclub singer weds a struggling songwriter, but when his fame eclipses hers, she delves into alcoholism.

Smash-Up, the Story of a Woman, also called A Woman Destroyed, is a 1947 American drama film with elements of film noir which tells the story of a rising nightclub singer who marries another singer, whose career takes off, then falls into alcoholism after giving up her career for him.

The screenplay was written by John Howard Lawson, based on a story by Dorothy Parker, Frank Cavett and Lionel Wiggam. Produced by Walter Wanger under his personal contract with Hayward, the film was directed by Stuart Heisler. Ethel Wales appears in an uncredited part.

The film was nominated for Academy Awards for Best Actress in a Leading Role (Susan Hayward) and Best Writing, Original Story.

With similar story elements to A Star Is Born, it was rumored to be a crypto-biography of Bing Crosby and his stormy first marriage to Dixie Lee. A highlight popular with critics and fans was the violent, slapping and hair-pulling fight between rivals Hayward and Hunt in the ladies‘ powder room (a scene repeated by Hayward twenty years later in Valley of the Dolls).

Plot
In a hospital, Angie Evans (Susan Hayward), her face bandaged, recounts the events that brought her here.

A nightclub singer, Angie becomes involved with another singer, Ken Conway (Lee Bowman), whose career has yet to take off. Her agent Mike Dawson (Charles D. Brown) helps get Ken and piano accompanist Steve Anderson (Eddie Albert) a spot on a radio show singing cowboy songs. Ken sings a ballad on the day Angie, now his wife, gives birth to their daughter. The attention he gets leads to a new career opportunity.

Ken soon is a big success, gaining popularity and wealth, while Angie stays home, her career at a standstill. She begins to drink. Ken counts on her to present a sophisticated image for his new high-society friends and contacts, but her alcoholism worsens, so secretary Martha Gray (Marsha Hunt) comes to Ken’s aid.

It isn’t long before Angie is certain Martha and her husband are having an affair. Steve tries to intervene on Angie’s behalf, but he can see Martha has fallen in love with Ken.

Angie neglects the child, continues to drink, then creates a scene at a party. Ken asks for a divorce and custody. Mike helps Angie get work in a club. She is determined to stay sober so she can regain custody of her daughter. Instead, she ends up in a bar, and wakes the next morning in the apartment of strangers who found her passed out on their stairs.

Angie kidnaps her daughter from the park while the nurse isn’t watching. They go to a house in the country where Angie dutifully gives the child dinner and puts her to bed. After she sings her daughter to sleep, she forgets a lit cigarette in the room. Downstairs, she begins to drink and gets lost in memories. The child’s shouts finally alert her and Angie rescues her from the flames, but herself suffers serious facial burns.

Realizing that she has hit rock bottom, Angie is positive now she can move forward happily. Ken has talked things over with her doctor and feels that he would like to try to stand by her.

0
Be the first to review “Smash-Up, the Story of a Woman” Cancel reply 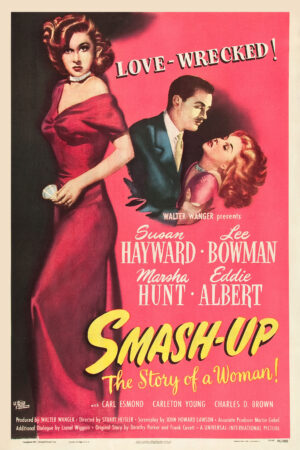