194878 minFilm-Noir, Horror, Thriller
+ Playlist
Sign in to add this movie to a playlist.
0

On the beach one night, Christine Faber, two years a widow, thinks she hears her late husband Paul calling out of the surf...then meets a tall dark man, Alexis, who seems to know all about such things. After more ghostly manifestations, Christine and younger sister Janet become enmeshed in the eerie artifices of Alexis; but he in turn finds himself manipulated into deeper deviltry than he had in mind.

The Amazing Mr. X, also known as The Spiritualist, is a 1948 American horror thriller film noir directed by Bernard Vorhaus with cinematography by John Alton. The film tells the story of a phony spiritualist racket. The film is prominently featured in Alton’s book on cinematography Painting with Light (1949).

Plot
Two years after her husband’s death, Christine Faber (Lynn Bari) thinks she hears her late husband (Donald Curtis) calling out of the surf on the beach one night. She meets a tall dark man named Alexis (Turhan Bey) who seems to know all about her.

After more ghostly manifestations, Christine and her younger sister (Cathy O’Donnell) become enmeshed in the strange life of Alexis, a spiritualist; but he in turn finds himself manipulated into deeper devilry than he had in mind. Alexis has hired Emily (Virginia Gregg) as Christine’s maid to learn secret inside information. Sister Janet checks out Alexis only to fall in love with him. Christine gets engaged to Martin (Richard Carlson) and he hires a detective (Harry Mendoza) to protect Christine.

Alexis puts on a convincing séance and afterward the real Paul Faber appears. He had faked his own death and now Alexis must continue his con in concert with Paul. Christine hears Paul’s voice and falls off a cliff only to be saved by Alexis and Janet. Martin wants Christine to leave her house for safety. Christine wants to hear Paul’s voice and his piano music. Janet starts to search the house for speakers and she finds Alexis and the alive Paul. Alexis protects Janet but he is shot. The police arrive and shoot and kill Paul.

0
Be the first to review “The Amazing Mr. X” Cancel reply 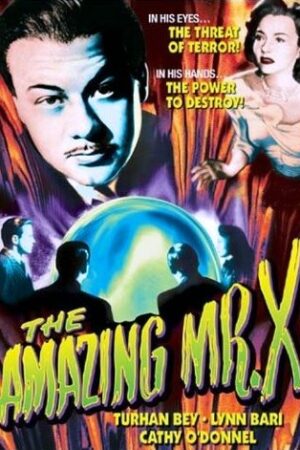