They Came from Beyond Space

A group of scientists are possessed by an alien force when they investigate a meteor shower in a rural field.

They Came from Beyond Space is a 1967 British Eastman Color science fiction film produced by Max J. Rosenberg and Martin Subotsky, and directed by Freddie Francis. The screenplay was written by Subotsky, based on the book The Gods Hate Kansas by Joseph Millard. The film stars Robert Hutton, Jennifer Jayne, Zia Mohyeddin and Bernard Kay. The narrative follows the adventures of a scientist who tries to stop space aliens who are made of pure energy from enslaving humans in order to rebuild their spaceship so that they can return to their home planet.

The film is from Amicus Productions. They Came from Beyond Space used many of the sets and props left over from Amicus’s Daleks’ Invasion Earth 2150 A.D. (1966) as a cost-cutting measure.

Plot
An unusual V-shaped formation of meteorites has fallen in Cornwall. A group of scientists are appointed to investigate, but its head, Dr. Curtis Temple (Hutton), is forbidden by his physician from going as Curtis is recovering from an automobile accident and has a silver plate in his skull. He turns the mission over to Lee Mason (Jayne), his colleague and lover.

When the scientists arrive at the site, they find the meteorites to be unusual in shape and colour—they’re rather pointy and blue. And they house aliens who exist as ‘pure energy’. A geologist attempts to chisel off a piece of meteorite, but as soon as he strikes it, it emits a blinding flash of light and a high-pitched screech as the aliens take over the scientists’ bodies and minds.

Concerned that the only contact with Lee has been her requisitions for millions of pounds’ worth of equipment—including weapons—Curtis decides to visit the site despite his MD’s orders. But before he leaves, a fellow scientist (Geoffrey Wallace) determines that the meteorites have, surprisingly, come from the moon.

Upon arrival, Curtis finds that the site resembles a military post, with armed guards and a 10,000-volt electric security fence. Lee herself bars him from entering.

An agent from ‘Internal Security’ has been tailing Curtis but must phone his superior for permission to give Curtis a full situation report. He enters a phone box to place the call, then suddenly stumbles out, covered with red spots, and falls dying to the ground. A small crowd gathers. A doctor steps forward, but after touching the agent, he too dies. Then each member of the crowd succumbs. The press dramatically dubs this unknown disease ‘The Crimson Plague’. A television commentator assures viewers that although no cause or cure has been discovered, the authorities have developed a secret method of safely disposing of the victims’ bodies.

After watching a night-time rocket launch from the site, Curtis decides to prevent another launch. A crack shot, he returns the next day with a sniper rifle and destroys the generator that supplies power to the camp, thus stopping the second launch. He climbs over the now-deactivated electric fence into the site.

After entering the aliens’ headquarters, Curtis, who is also an expert in unarmed combat, wins a violent fight with one of them. He goes to a vast underground complex. There, he discovers the frozen bodies of the plague victims. But he is captured and locked in a cell. Curtis escapes by simply hiding behind his cell door and jumping the alien (Kay) who comes to kill him. Curtis then rescues an unwilling Lee, knocking her out with a swift punch to the jaw and carrying her off.

He takes her to the home of his friend Farge (Mohyeddin). Curtis realises that the silver plate in his head somehow prevents the aliens from possessing him. He convinces Farge to melt his beloved silver cricket trophies and a fashions a colander-like protective helmet for him.

Farge uses ultraviolet light to exorcise Lee’s alien. Unfortunately, she remembers nothing from her time under alien control. But she can pretend that she is still an alien and drives to the site with Curtis and Farge hiding in the back of her Land Rover. Lee, too, is protected by a silver helmet.

The three conceal themselves in a rocket just before it blasts off. But they’re soon discovered and brought before the Master of the Moon (Michael Gough), who tells them that the government’s secret plan to dispose of the plague victims’ bodies is to shoot them to the moon.

The Master explains to Curtis, Lee and Farge that the aliens are creatures of pure energy and are using the humans to repair their spaceship, which had crashed on the moon. They want to return to their home planet to die, as they have grown old and tired after light years of travel. The frozen bodies Curtis had found are not really dead. The Master assures them that once the spaceship is repaired, all the ‘victims’ will be returned to normality.

Nonetheless, the aliens prepare to surgically remove Curtis’s silver plate so that they can tap his knowledge. Farge leads the workers in a revolt and saves Curtis.

Curtis tells the Master of the Moon that they needn’t have attempted to conquer the Earth—all they had to do was ask for help, and it would have gladly been given. The Master’s eyes well up with tears at the revelation. 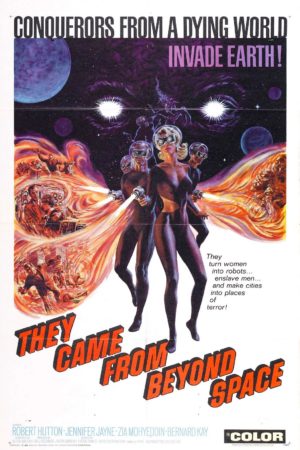