Scientists use a gigantic drilling machine for an expedition to the center of the earth.

The film’s storyline concerns a scientific expedition seeking livable space deep beneath the Earth’s surface in the event a nuclear war makes living above ground impossible.

Plot
Dr. Jeremiah Morley (Victor Kilian) is concerned about an imminent nuclear war. He organizes an expedition of scientists and has them use a large atomic-powered tank-like boring machine, called the Cyclotram, capable of drilling down deep through the Earth’s surface in order to find an underground environment where humanity could escape and survive a future nuclear holocaust.

The expedition (Jim Bannon, Marilyn Nash, Otto Waldis, Tom Handley, and Dick Cogan) begins after government funding has fallen through, and they are bailed out at the last minute by private funding from a newspaper heir (Bruce Kellogg), who insists on going with them as a lark. Romantic rivalry soon develops between Bannon and Kellogg for Nash, and during the dangerous underground expedition two lives are lost to the perils of their adventure.

In the end the scientists accomplish their goal and find an enormous underground expanse with a plentiful air supply, its own large ocean, and phosphorescent light. However, all the lab rabbits brought with them give birth to dead offspring. Through autopsies, it is discovered that this strange underground world has somehow rendered the rabbits, and hence any other life form, sterile. Dr. Morley is deeply depressed by this news. When an underground volcano suddenly erupts, he fails to enter the safety of the Cyclotram and quickly perishes.

The Cyclotram, carrying the remaining survivors, enters the underground ocean to avoid the eruption. They soon find themselves rising toward the surface of the upper world, having been caught up in a strong, upward-moving ocean current. They eventually break the surface near an unknown tropical island.

Be the first to review “Unknown World” Cancel reply 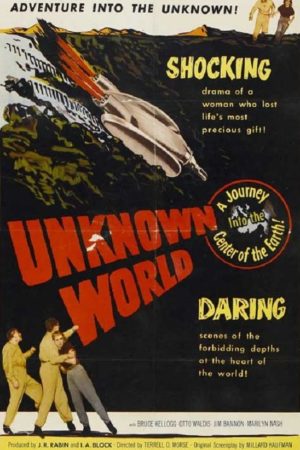