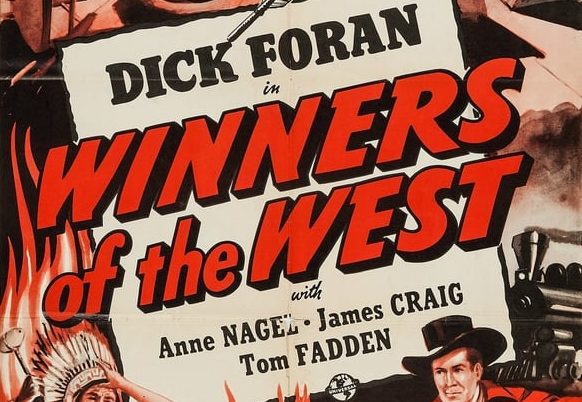 Winners of the West

Beyond Hell's Gate Pass is territory controlled by a man who calls himself King Carter; he uses a variety of schemes to prevent the railroad from being built, for fear it will finish his control of (what he considers) his land.

Winners of the West is a 1940 Universal movie serial directed by Ford Beebe and Ray Taylor. It stars Dick Foran and Anne Nagel in a plot about the construction of a railroad and a local ganglord who opposes it. It was Universal’s 115th serial release (the 47th with sound).

The studio had used the name for an earlier silent serial but there are no plot similarities between the two versions. Columbia’s Roar of the Iron Horse is very similar to this serial, however, and the writer George H. Plympton worked on both.

Plot
The Southwest Central Railroad Company is attempting to build a railroad through “Hell’s Gate Pass”. However, King Carter, the self-appointed ruler of the land beyond the pass, does not want this to happen. He sends henchmen, including local Indians, to disrupt the construction anyway they can, from sabotage to kidnapping Claire Hartford, the daughter of the company President. The President’s assistant, Jeff Ramsay, and his sidekicks, stop King Carter’s schemes at every point and eventually defeat him entirely. This opens the area up to new settlers, the first of which is Jeff himself and his new wife Claire.