When bookseller Buzz cons Diana into thinking that his friend Stanley knows all there is to know about Africa, they are abducted and ordered to lead Diana and her henchmen to an African tribe in search of a fortune in jewels.

Africa Screams is a 1949 American adventure comedy film directed by Charles Barton and starring Abbott and Costello. It parodies the safari genre. The title is a play on the title of the 1930 documentary Africa Speaks! The supporting cast features Clyde Beatty, Frank Buck, Max Baer, Buddy Baer, Shemp Howard, and Joe Besser. The film entered the public domain in 1977.

Plot
Diana Emerson (Hillary Brooke) is in the book department of Klopper’s Department store looking for a copy of the book Dark Safari, written by the famed explorer Cuddleford. Buzz Johnson (Bud Abbott) overhears Diana saying that she will pay $2,500 for a map that is inside that book. He devises a plan to pass off his friend Stanley Livington (Lou Costello) as a great explorer who accompanied Cuddleford on the expedition described in the book. With claims that he can reproduce the map, the two men go to Diana’s home that very night. They agree to accompany her on an African expedition, and when Buzz overhears that Clyde Beatty has been offered $20,000 to lead the expedition, he feels that the map is worth considerably more than $2,500.

They travel to Africa, along with Diana’s team of explorers, including Harry (Joe Besser), ‘Boots’ Wilson (Buddy Baer), ‘Grappler’ McCoy (Max Baer) and Gunner (Shemp Howard), a nearsighted professional hunter. The boys learn that the true expedition is for diamonds rather than exploration, and Buzz plans to renegotiate the deal. Stanley cannot reproduce the map, as he has never seen it, and the two attempt to bluff their way around the jungle.

Eventually Buzz and Stanley find a trail of diamonds, which lead straight to a cannibal village, where the residents intend to roast the two. They are rescued by a gorilla who has taken a liking to Stanley after he rescues it from a trapper’s pit.

The next day the cannibal tribe meets with the rest of the expeditionary team, where the chief offers several diamonds in exchange for Stanley (“Chief have sweet tooth,” explains his translator.). They start to chase Stanley all over the place while Buzz buries the diamonds. The expeditionary team, along with the tribal warriors, are finally frightened away by a giant gorilla (Charles Gemora), whose existence had been dismissed as a myth earlier in the film. Stanley rushes to find Buzz, only to discover that Buzz, having lost the diamonds, has had enough and is abandoning his friend. Meanwhile, the friendly gorilla from before digs up the diamonds that Buzz has hidden and gives them to Stanley offscreen.

Some time after returning to the United States, Stanley owns the department store, along with the gorilla, and Buzz works for them as the elevator operator.

0
Be the first to review “Africa Screams” Cancel reply 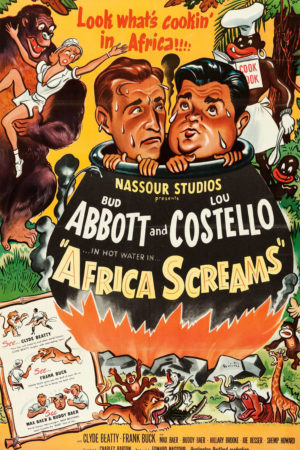