Battle Beyond the Sun

Two countries race to have the first successful landing on Mars.

Battle Beyond the Sun is the English-dubbed and re-edited U.S. version of Nebo Zovyot, a 1959 Soviet science fiction film directed by Mikhail Karyukov and Aleksandr Kozyr. It tells of the “space race” of two future nations competing to become the first to land a spacecraft on the planet Mars.

Plot
Roger Corman acquired the film for US distribution and hired a young film-school student named Francis Ford Coppola to Americanize it.[1] In addition to preparing a dubbing script free of anti-American propaganda and all references to the USSR, and supervising the dubbing, Coppola slightly re-edited the footage, eliminated the framing “daydream” sequences, and even saw to it that a pastel rhombus shape was matted in on a shot-by-shot basis, to cover the Cyrillic letters CCCP (USSR) which adorned the space station and Soviet rocketships.

Coppola also had filmed a few shots of two space monsters fighting and cut them into the Soviet material. According to Jack Hill, who worked on the new version (it was his first paid job for Roger Corman), Coppola’s idea was that one monster would look like a penis and the other a vagina.[2] The new monster scenes were shot on a sound stage in Hollywood. Hill and Coppola also shot some footage of the Rose Parade at Pasadena.

The film opens with a non-sequitur prologue in which a narrator voice explains space flight concepts. Models of space craft “currently under development by the United States Government” are shown in succession. The narrator usefully explains that “the motion picture you are about to see may be called ‘a fantasy of the future’.”

The time: November 1997. In the “fear-ridden years following the great atomic war”, the world has been divided into northern and southern hemispheres. The two countries, North Hemis and South Hemis, are clearly analogues for the United States and Soviet Union. The camera zooms in toward the South Hemis banner. Dr. Albert Gordon and his wife, Dr. Ruth Gordon, currently head the top secret “Project Red Planet” for South Hemis. (The footage we see is dubbed from the original Russian-Soviet; names have been Anglicized.) A space mission – more re-purposed footage – blasts off for an orbiting space station. The mission docks with the station, delivering the Gordons as well as Astronaut Craig Matthews.

South Hemis has been developing the Mercury, a spacecraft which should be able to complete a mission to Mars. Solar and orbital conditions are favorable. Suddenly, another spacecraft is detected approaching the station. It is from North Hemis. It requests and receives permission to land for emergency repairs. The two North Hemis astronauts – Captain Torrance and his co-pilot Dr. Martin – are treated to dinner by their South Hemis hosts. Dr. Gordon reveals that they themselves are about to commence a flight to Mars. The two North Hemis astronauts decide to end dinner, because “it’s getting late”.

Captain Torrance confers with his superiors in North Hemis. He wants to preempt the South Hemis flight to Mars with their own mission. Meanwhile, Dr. Martin meets with Dr. Gordon to discuss both missions. The North Hemis astronaut refuses to divulge any information about the North Hemis plan. Captain Torrance says, “I cannot accept defeat.” He disconnects from his North Hemis superiors and barges in on the meeting between Dr. Martin and Dr. Gordon. Outside in the corridor, Captain Torrance decides to proceed with the flight to Mars anyway. “Our repairs may not hold up,” says Dr. Martin. They decide to commandeer their rocketship – the Typhoon – under cover of trying to repair it. They blast off at full power. Paul Clinton, a South Hemis astronaut, is caught in the rocket back blast and is injured. Meanwhile, the Typhoon sets course for Mars.

Paul Clinton is diagnosed with a concussion and cannot go on the Mars mission; Dr. Gordon will go with Craig Matthews. The Mercury launches. Meanwhile, the Typhoon encounters a meteor storm, and its course veers dangerously close to the sun. The ship is disabled. The Mercury locates the Typhoon and eventually intercepts it. Matthews effects an EVA transfer of the two North Hemis astronauts. The South Hemis ship abandons the Typhoon to space.

The Mercury is now low on fuel and cannot reach Mars. Dr. Gordon decides to land on the asteroid Angkor which orbits Mars. (Mars in reality is orbited by two planetoid moons, Phobos and Deimos.) The ship successfully lands on the asteroid. A brief insert shows a vague form in the shadows behind a rock formation: a roaring monster. Meanwhile, back at the space station, the South Hemis superiors decide to send a fuel rocket to Angkor. This will allow the stranded rocket to re-fuel and return home. The fuel pod is successfully launched. Dr. Gordon and his team appear to gain remote control of it, but something (solar radiation?) interferes with its guidance system and it crashes into the asteroid, exploding.

South Hemis decides to send a second, manned, fuel rocket to the asteroid. Astronaut Paul Clinton will pilot the flight. The fuel pod successfully makes the journey and lands on Angkor. Clinton must leave the ship in order to rendezvous with Dr. Gordon and his stranded team. As he makes his way across the craggy asteroid surface, he encounters two monsters in combat. He continues toward the stranded Mercury, but collapses and dies. It is understood that he conveyed the whereabouts of the landed fuel rocket. Dr. Gordon and his team can return to Earth.

The Mercury launches from Angkor. It passes the space station and returns to Earth, landing at an offshore platform. Adoring throngs of people (composed from more re-purposed Soviet footage, including some insert shots from the Pasadena Rose Parade) greet them with exuberant admiration. Boats are launched to pick up the team, who return to shore. Dr. Gordon is reunited with his wife and they embrace. Children present them with flowers.

Dr. Gordon and his team did not make it to Mars, but they have set the stage for further exploration of space sometime in the near future. 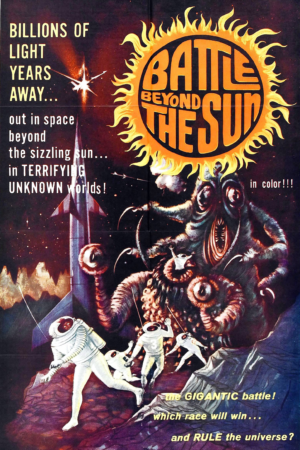