194870 minAction, Adventure, Western
+ Playlist
Sign in to add this movie to a playlist.
0

A ranch owner (Francis Ford) turns his place into a home for boys who have lost their fathers in World War II. His evil female lawyer (Nana Bryant) covets the ranch and works in cahoots with Ford's long-lost nephew and a pack of killer dogs to get it. U.S. Marshal Roy Rogers puts an end to her plans.

Eyes of Texas is a 1948 American Western film shot in Trucolor directed by William Witney and starring Roy Rogers.

Plot
Kindly Thad Cameron runs a ranch for boys whose fathers were killed in World War II. The ranch is named in the memory of his nephew and last surviving family member Frank Cameron who was killed in Italy.

Thad’s attorney Hattie Waters informs Thad that his nephew has been found alive after being cured of amnesia. Unfortunately, the real Frank remains dead as the scheming Hattie recruits a former convict to impersonate Frank. After tricking Thad to create a new will leaving all his fortune to Frank, she sets a pack of trained-to-kill dogs onto Thad with everyone believing Thad was killed by a pack of wolves.

U.S. Marshal Roy Rogers with the help of Dr. Cookie Bullfincher and his nurse Penny Thatcher investigate the matter to bring justice where and to whom it is due.

0
Be the first to review “Eyes of Texas” Cancel reply 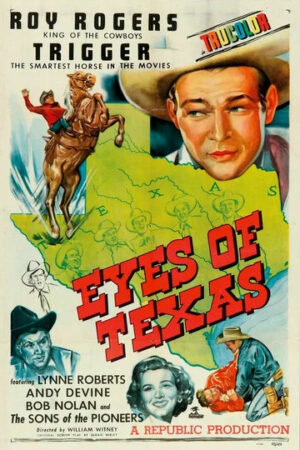