Charles "The Butcher" Benton, a brutal death row inmate gets double-crossed by his crooked lawyer. He gets his chance for revenge when, after he's been executed, a bizarre experiment brings him back to life and more deadly than ever.

The picture was produced independently by C.G.K. Productions, and distributed in the United States by Allied Artists Pictures Corporation. The film was distributed theatrically in 1956 on a double bill with World Without End (and in some areas with Invasion of the Body Snatchers).

Plot
Told in a narrative style, popularized by the television police series Dragnet, by police detective Dick Chasen (Max Showalter), the story concerns a 72-hour period of horror for the city of Los Angeles. Charles “Butcher” Benton (Chaney) is a double-crossed convicted robber and murderer who was executed in the gas chamber. His body is unlawfully sold to a scientist (Robert Shayne) who plans to move his experiments into the cause and cure of cancer to human subjects. Benton’s corpse is subjected to chemical injection and massive jolts of high-voltage electricity in order to study the effect on human tissues. But Benton’s heart is restimulated and he completely revives (though rendered mute due to electrical damage to his vocal cords), immensely strong and with skin virtually impervious to scalpels, police bullets, even to bazooka shells.

After killing the doctor and his assistant (Joe Flynn), Benton sets out to avenge himself on his two henchmen and his attorney (Ross Elliott) who, in collusion with the attorney, had betrayed Benton in order to steal his loot. Benton had left the location of his stash to his stripper-girlfriend (Marian Carr), who had since gone straight and begun dating the detective who brought Benton to justice, after she had rejected the lawyer’s own advances.

The story then follows Benton’s revenge on his enemies; the police who first learn of a wave of mysterious killings, then of Benton’s reanimation; and the developing relationship between the detective and the stripper. The lawyer, fearing for his life after the two henchman are murdered, confesses the plot to the police, and reveals that Benton had always used the sewer system to evade detection; and to find a hiding place for the money, as it turns out.

Tracked down by the police, Benton takes a direct hit in the solar plexus from a bazooka, and is heavily burned by a flame thrower. Weakened, he flees to a power station, where he climbs atop a gantry, inadvertently setting it in motion. As he watches the actions of the police down below, he fails to notice that the gantry is moving toward the main transformer. A dangling hook comes too close to one of the terminals, and the other transformers erupt in sparks. as hundreds of thousands of volts surge throughout its metal frame, searing Benton to ashes. On a quiet night a few days later, Chasen successfully proposes to his girlfriend.

* Marvin Press was misidentified as Marvin Ellis (the last name of his character) in all the film’s publicity. Worse, his name was entirely omitted from the screen cast list.

0
Be the first to review “Indestructible Man” Cancel reply 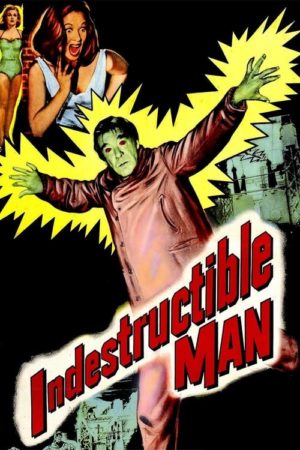