A comedy based on NBC's "People Are Funny" radio (and later television) program with Art Linkletter with a fictional story of how the program came to be on a national network from its humble beginning at a Nevada radio station. Jack Haley is a producer with only half-rights to the program while Ozzie Nelson and Helen Walker are the radio writers and supply the romance. Rudy Vallee, always able to burlesque himself intentional and, quite often, unintentional, is the owner of the sought-after sponsoring company. Frances Langford, as herself, sings "I'm in the Mood for Love" while the Vagabonds quartet (billed 12th and last) chimes in on "Angeline" and "The Old Square Dance is Back Again."

People Are Funny is a 1946 American musical comedy film directed by Sam White based on the popular radio show of the same name.

Plot
Radio producer John Guedel is panicked and dumbfounded when his popular radio show Humbug is immediately taken off the air for making fun of the legal profession. Given a deadline to produce a replacement, Gudel contacts his writer girlfriend Corey Sullivan to help him but Corey has another client, Leroy Brinker seeking a radio show for himself. The two come across a radio show put on in a small town called People Are Funny that mixes bizarre challenges to contestants with musical entertainment. Corey gets the show’s producer Pinky Wilson to bring his show to Mr Guedel.

0
Be the first to review “People Are Funny” Cancel reply 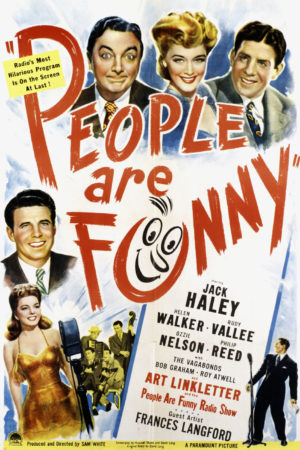