Evil aliens attack Earth and set their terrible "Plan 9" in action. As the aliens resurrect the dead of the Earth to destroy the living, our lives are in danger.

Plan 9 from Outer Space is a 1959 American independent science-fiction horror film written, produced, directed and edited by Ed Wood, starring Gregory Walcott, Mona McKinnon, Tor Johnson, and “Vampira” (Maila Nurmi), and narrated by Criswell. It also posthumously bills Bela Lugosi as a guest star (silent footage of the actor had actually been shot by Wood for another, unfinished film just prior to Lugosi’s death in August 1956). Other guest stars are Hollywood veterans Lyle Talbot (who claimed that he never refused any acting job) and former cowboy star Tom Keene. Plan 9 from Outer Space was released theatrically in 1959 by Distributors Corporation of America (then credited as Valiant Pictures).

The film’s storyline concerns extraterrestrials who seek to stop humanity from creating a doomsday weapon that could destroy the universe. The aliens implement “Plan 9”, a scheme to resurrect the Earth’s dead, referred to as “ghouls”. By causing chaos, the aliens hope the crisis will force humanity to listen to them; otherwise the aliens will destroy mankind with armies of the undead. The film was originally developed under the title Grave Robbers from Outer Space, but its financial backers objected to this title, which they saw as being sacrilegious, and it was retitled Plan 9 from Outer Space prior to production.

Plan 9 from Outer Space played on television in relative obscurity until 1980, when authors Harry Medved and Michael Medved dubbed it the “worst film ever made” in their book The Golden Turkey Awards. Wood and his film were posthumously given two Golden Turkey Awards for Worst Director Ever and Worst Film. It has since been retrospectively described as “The epitome of so-bad-it’s-good cinema” and has gained a cult following.

Plot
Mourners are gathered around an old man at his wife’s grave. Overhead, an airliner heads toward Burbank, California. The pilot, Jeff Trent, and his co-pilot Danny are blinded by a bright light and loud noise. They look outside and see a flying saucer. They follow the saucer’s flight until it lands at the graveyard, where the funeral’s gravediggers are killed by a female zombie.

At home, lost in his grief, the old man goes outside and (offscreen) steps in front of an oncoming car and is killed. Mourners at the old man’s funeral discover the dead gravediggers. Inspector Daniel Clay and other police officers arrive, but Clay goes off alone to continue his investigation.

Trent and his wife Paula, who live near the graveyard, hear the sirens and Jeff tells Paula about his flying-saucer encounter, stating that the army has since sworn him to secrecy. A powerful swooshing noise then knocks everyone at the Tanner residence and the nearby graveyard to the ground as a saucer lands. Police Inspector Clay encounters the female zombie and the old man’s reanimated corpse, and they kill him. Investigating Clay’s disappearance, Lt. Harper states: “But one thing’s sure. Inspector Clay is dead, murdered, and somebody’s responsible”.

Newspaper headlines continue to report flying-saucer sightings over Hollywood Boulevard, while a trio of saucers flies over Los Angeles. In Washington, D.C., the military fires missiles at more saucers, while the Chief of Saucer Operations, Col. Thomas Edwards, reveals that the government has been covering up saucer attacks. He mentions that one small town was annihilated, hinting at a secret history of other encounters.

The aliens return to their Space Station 7. Commander Eros informs their ruler that he has been unsuccessful in contacting Earth’s governments. To force their acknowledgment, Eros recommends implementing “Plan 9”, which will resurrect recently-dead humans by stimulating their pituitary and pineal glands. Meanwhile, Trent prepares for another flight; concerned for his wife’s safety he urges her to stay with her mother, but she insists on staying home. That night, the zombified old man rises from his grave and breaks into the house. He pursues Paula outside, where his zombie wife and zombie Inspector Clay join him. Paula manages to escape, then collapses from her ordeal while the three zombies return to Eros’ saucer.

At the Pentagon, Gen. Roberts informs Edwards that the government has been receiving alien messages. They explain that the aliens are trying to prevent humanity from eventually destroying the universe. The general dispatches Edwards to San Fernando, California, where most of the alien activity has occurred.

Though the undead are under alien control, zombie Clay suddenly attacks and nearly strangles Eros. The ruler closely examines zombie Clay, then orders the zombie old man destroyed to further frighten humanity. He then approves Eros’s Plan 9 to raise undead armies and orders that they march on the capitals of Earth.

In California, the police and Edwards interview the Trents, not knowing that the flying saucer has returned to the graveyard. Officer Kelton encounters the zombie old man, who chases him into the Trents’ yard where Eros’ ray hits him and his body rapidly decomposes. Stunned, Edwards, the Trents, and the police drive to the cemetery.

John Harper insists on leaving Paula in the car, but Paula refuses to stay alone, so Kelton stays with her. Eros and fellow alien Tanna send zombie Clay to kidnap Paula and lure the other three to their saucer. Seeing the saucer’s glow off in the distance, Trent and the police head toward it. At the car, zombie Clay knocks out Kelton; when he awakens, Kelton calls for help and Patrolman Larry responds.

Eros lets Trent and the police enter his saucer with their guns drawn. He then tells them human weapons development will inevitably lead to the discovery of “Solaronite,” a substance that has the effect of exploding “sunlight molecules.” Such an explosion would set off an uncontrollable chain reaction, destroying the entire universe. Eros now believes humans are too immature and stupid (“You see? You see? Your stupid minds. Stupid! Stupid!”), so he intends to destroy mankind. He threatens to kill Paula if Trent and the police try to force him to go with them. Officers Kelton and Larry arrive and see zombie Clay holding the unconscious Paula near the saucer. Realizing that their weapons are useless, they sneak up behind Clay and club him with a length of wood, knocking him out. Eros sees this and says Clay’s controlling ray has been shut off, which released Paula. A fight breaks out between Eros and Jeff, but the saucer’s equipment is damaged during the struggle, starting a fire aboard. The humans quickly escape, and Tanna and the unconscious Eros fly away in their burning saucer, which finally explodes, killing them both; their zombies quickly decompose to skeletal remains inside their clothing. 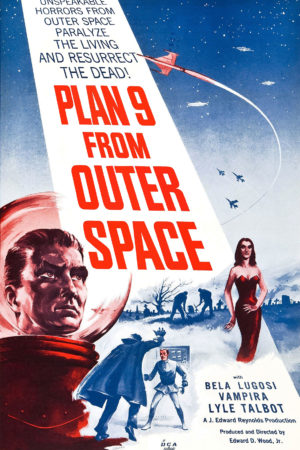