Prisoners of the Lost Universe

Three people are transported into a parallel reality, where they find they must use modern technology, but medieval weapons, in order to save the citizenry from a murderous warlord.

Prisoners of the Lost Universe is a low budget 1983 film set in a parallel universe and filmed in South Africa.

Three people are transported to another world when an earthquake occurs just as the scientist is experimenting with his “matter” transmitter. The trio must escape the strange world of Vonya while dealing with a number of villains.

Plot
TV personality Carrie Madison goes to visit crackpot scientist Dr. Hartmann who has invented a teleporter to another dimension. On the way she gets into a car accident with electrician Dan Roebuck, mainly caused by earthquake tremors, which effectively destroys Dan’s pickup, and they argue. While demonstrating his machine to Carrie, Hartmann disappears. Dan comes to the house looking for help; while he and Carrie examine the machine they, too, disappear. Carrie finds herself alone in what appears to be a prehistoric world in a parallel universe, called Vonya, where time runs differently. Unable to find the Doctor, Dan and Carrie must figure out a way to get back home. Before they can do that, however, they must deal with tribes of savage cavemen, as well as a brutal warlord named Kleel who has taken a liking to Carrie and seems to be unusually well-supplied with Earth technology… 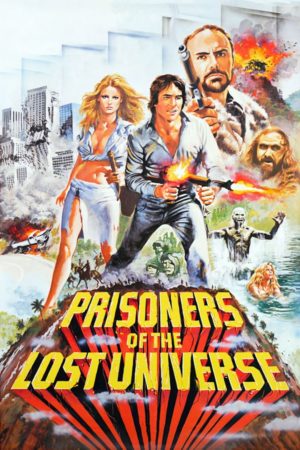