A young alien and a teenage earthling fall in love, and plot to stop the alien's race from using Earth as a food-breeding ground for giant lobsters from their planet.

Teenagers from Outer Space (a.k.a. The Gargon Terror (UK title), The Boy from Outer Space, and originally titled The Ray Gun Terror) is a 1959 independently made American black-and-white science fiction film released by Warner Bros. The film was produced, written, and directed by Tom Graeff and stars David Love, Dawn Bender, Bryan Grant, Harvey B. Dunn, Tom Graeff, and King Moody. Teenagers from Outer Space was distributed theatrically by Warner Brothers on a double feature with Gigantis the Fire Monster, the English-dubbed version of the 1955 Japanese giant monster film Godzilla Raids Again.

In the film, alien teenager Derek abandons his crew to search for a new life on Earth, while one of his crewmates is sent to kill him while they attempt to eradicate human life in order to farm Earth with giant lobster-like livestock they call Gargons.

The film was later shown on Mystery Science Theater 3000, Elvira’s Movie Macabre, and Off Beat Cinema.

Plot
An alien spaceship comes to Earth while searching for a planet suitable to raise “Gargons”, a lobster-like but air-breathing creature that is a delicacy on their home world. Thor (Bryan Grant) shows his alien contempt for Earth’s creatures by vaporizing a dog named Sparky. Crew member Derek (David Love), after discovering an inscription on Sparky’s dog tag, fears that the Gargon might destroy Earth’s native inhabitants. This makes the other aliens scoff at the thought. Being members of the “supreme race”, they disdain “foreign beings”, no matter how intelligent; they pride themselves that “families” and “friendships” are forbidden on their world. Derek turns out to be a member of an alien underground that commemorates the more humane periods of their world’s history.

Their one Gargon seems to be sick in Earth’s atmosphere. While his crew mates are distracted, Derek leaves. Eventually, the Gargon seems to revive. When the Captain reports his actions, Derek is quickly connected to their Leader (Gene Sterling); Derek, it turns out, is the Leader’s son, although Derek is unaware of this. Thor is sent to hunt down Derek, with orders to kill him in order to protect their mission to Earth. They return to their base, leaving the Gargon behind.

Meanwhile, Derek finds the home address he found on the dog’s tag. There he meets Betty Morgan (Dawn Anderson) and her Grandpa Joe (Harvey B. Dunn). They have a room to rent, and Derek inadvertently becomes a boarder. When Betty’s boyfriend, reporter Joe Rogers (Tom Graeff), cannot make their afternoon date, Derek tags along with Betty. He shows the tag to Betty, who recognizes it immediately. Derek takes her to the place where the spaceship landed and shows her Sparky’s remains. She does not believe him, so he describes Thor’s weapon that can also vaporize humans. Betty takes this surprisingly well and vows to help Derek stop his crewmate.

For the rest of the day, Betty and Derek have several run-ins with Thor, and Joe follows up on stories of skeletons popping up all over town. Eventually, Thor is wounded, and he kidnaps Betty to help him receive medical attention, in the process revealing Derek’s true parentage to her. Two car chases and a gunfight follow, and Thor is finally captured by Earth authorities after plummeting off a cliff in a stolen car.

But there are bigger problems: the Gargon has grown immensely large in Earth’s atmosphere, killing a policeman investigating the alien’s landing site, and attacking numerous people. Derek and Betty go to the car wreck site to look for Thor’s raygun. They share a kiss, and Derek vows to stay on Earth. When the Gargon ruins their romantic moment, Derek finds the raygun just in time for them to be able to escape. Unfortunately, it is out of power and the enlarged Gargon is heading toward town. They follow and confront it, having used the overhead power lines to fuel the raygun’s disintegrator ray. They eventually kill the creature, but it is too late. Alien spaceships suddenly appear in orbit overhead.

The whole gang, including Joe and Grandpa, hurries to the alien landing site. Derek reunites with his father and makes the ultimate sacrifice, leading the overhead spaceships at full speed directly into his ground location, causing a massive explosion. Derek does not survive the blast but is remembered by Betty for declaring, “I shall make the Earth my home. And I shall never, never leave it.” 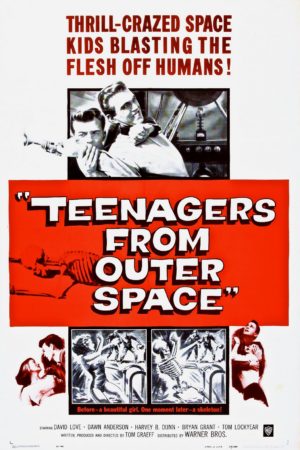