The story revolves around a little animated squirrel who, with much charm, accidentally helps two economically distressed families overcome their obstacles.

The Great Rupert is a 1950 comedy family film, produced by George Pal, directed by Irving Pichel and starring Jimmy Durante, Tom Drake and Terry Moore. It is based on a story, written by Ted Allan, which has also been published as a children’s book under the title “Willie the Squowse“.

Plot
Rosalinda Amendola, the daughter of happy but impoverished former acrobats is in love with the boy next door, aspiring composer Pete Dingle. Though Pete’s parents are wealthy, his miserly father Frank insists on hiding his money from his investments in the wall of their family home.

The situation changes when Joe Mahoney, a vaudeville performer who has fallen on hard times, has to leave his best friend and stage companion, Rupert a dancing squirrel, in Frank and Rosalinda’s town where he will have to fend for himself with the other squirrels and live in a tree. Unsatisfied with tree life, Rupert gains access to the Dingle home and unbeknownst to Frank, has his bed in Frank’s hidden cache of money. Rupert decides to clear room in his domicile by throwing Frank’s money through a hole so that it floats down into the Amendola household who think the money has come from Heaven in answer to Mrs. Amendola’s prayers.

Attracted by Louie Amendola not only paying his debts, but helping all the needy businesses of the town, the FBI, IRS and local police converge on the House of Amendola to discover the source of the family’s wealth.

0
Be the first to review “The Great Rupert” Cancel reply 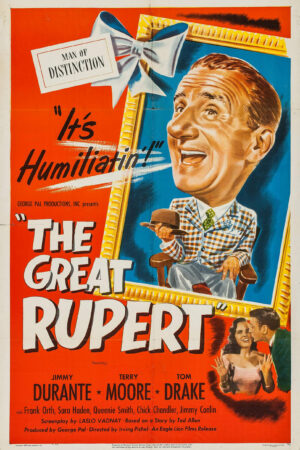