The Gun and the Pulpit

A young gunslinger on the lam impersonates a preacher, brings hope to his parishioners and law-and-order to a town terrorized by a strongman's bunch.

The Gun and the Pulpit is a 1974 American television film directed by Daniel Petrie. It was based on Jack Ehrlich’s 1972 novel The Fastest Gun in the Pulpit. Filmed at Old Tucson, it was a television pilot for a series to star former evangelist Marjoe Gortner.

Plot
Gunfighter Ernie Parsons escapes hanging for the killing of a disreputable character by the false testimony of a woman attracted to him. During his escape, he finds the body of a murdered minister. Searching the corpse, Ernie discovers a letter from a town who have invited the deceased man sight unseen to be their town minister. Ernie appropriates the victim’s clothes and belongings to escape his pursuers and vows revenge on the minister’s murderer.

Welcomed to town, Ernie’s first action is to preside over a funeral of Sam Underwood, a man murdered on the orders of town boss Mr. Ross. Attracted to Underwood’s daughter, Ernie decides to stay, using his gunfighter skills to stand up to Ross.

Parsons is ambushed by Ross’s men and dragged through the desert and left for dead. He is found in the desert and brought back to the Underwood’s home. Parsons arranges for a fake burial and takes to the hills, attacking Ross’s men through surprise attacks. Eventually, Parsons is persuaded to head back to town.

Parsons holds a service at church and is interrupted by Ross, who pretends to arrange a truce. The next day, Ross and his men come to town to ambush Parsons. Parsons asks for the help of men from the church, but they are too scared to help. When Parsons takes on Ross and his men alone, some of the men come to his aid. Ross is killed by Parsons and the war is over. Free to marry Underwood’s daughter, Parsons instead rides away, feeling his work is done and his impersonation of a preacher will only lead to trouble.

As Parsons rides away, he meets a preacher heading to town to investigate the events. The preacher convinces Parsons that he was right to protect the town in his own way, but doesn’t convince Parsons to return.

At least, not for the thirty seconds preceding the concluding freeze-frame, anyway. 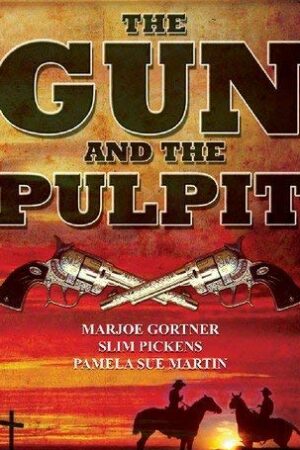