The Little Shop of Horrors

Seymour works in a skid row florist shop and is in love with his beautiful co-worker, Audrey. He creates a new plant that not only talks but cannot survive without human flesh and blood.

The Little Shop of Horrors is a 1960 American horror comedy film directed by Roger Corman. Written by Charles B. Griffith, the film is a farce about an inadequate florist’s assistant who cultivates a plant that feeds on human blood. The film’s concept is thought to be based on “Green Thoughts,” a 1932 story by John Collier about a man-eating plant. Dennis McDougal suggests that Griffith may have been influenced by Arthur C. Clarke’s sci-fi short story from 1956, “The Reluctant Orchid” (which was in turn inspired by the 1905 H. G. Wells story “The Flowering of the Strange Orchid”).

The film stars Jonathan Haze, Jackie Joseph, Mel Welles, and Dick Miller, who had all worked for Corman on previous films. Produced under the title The Passionate People Eater, the film employs an original style of humor, combining black comedy with farce and incorporating Jewish humor and elements of spoof. The Little Shop of Horrors was shot on a budget of $28,000 (about $240,000 in 2019), with interiors being shot in two days utilizing sets that had been left standing from A Bucket of Blood.

Plot
Penny-pinching Gravis Mushnick owns a florist shop staffed by himself and two employees, the sweet Audrey Fulquard and the clumsy Seymour Krelborn. The rundown shop gets little business. When Seymour fouls up an arrangement for sadistic dentist Dr. Farb, Mushnick fires him; hoping to change his mind, Seymour tells him about a special plant he has grown from seeds he got from a “Japanese gardener over on Central Avenue.” Seymour admits that he named the plant “Audrey Jr.”, which delights the real Audrey.

Seymour fetches his sickly, odd-looking potted plant, but Mushnick is unimpressed. When it is suggested that Audrey Jr.’s uniqueness might attract people to see it, Mushnick gives Seymour one week to revive it. The usual kinds of plant food do not nourish the plant, but when Seymour accidentally pricks his finger, he discovers that the plant craves blood. Fed on Seymour’s blood, Audrey Jr. begins to grow and the shop’s revenues increase when curious customers are lured in to see the plant.

The plant develops the ability to speak and demands that Seymour feed it. Now anemic, Seymour walks along the railroad track; when he carelessly throws a rock to vent his frustration, he inadvertently knocks out a man who falls on the track and is run over by a train. Guilt-ridden but resourceful, Seymour collects the body parts and feeds them to Audrey Jr. Meanwhile, Mushnick returns to the shop to get some cash and secretly observes Seymour feeding the plant. Mushnick considers telling the police, but procrastinates when he sees the line of people waiting to spend money at his shop the next day.

Seymour arrives the next morning suffering from a toothache; when he visits Dr. Farb, the doctor tries to get even for his ruined flowers and Seymour, defending himself, grabs a sharp tool and stabs and kills Farb. Although horrified, Seymour feeds Farb’s body to Audrey Jr. The unexplained disappearances of the two men attract the attention of Sergeant Joe Fink and his assistant Officer Frank Stoolie, who are take-offs of Dragnet characters Joe Friday and Frank Smith.

Audrey Jr., has grown several feet tall and is budding, as is the relationship between Seymour and Audrey. A representative of the Society of Silent Flower Observers of Southern California comes to the shop and announces that Seymour will receive a trophy, and that she will return when the plant’s buds open. While Seymour and Audrey go on a date, Mushnick stays at the shop to see that Audrey Jr. harms no one else.

Audrey Jr., has grown several feet tall and is budding, as is the relationship between Seymour and Audrey. A representative of the Society of Silent Flower Observers of Southern California comes to the shop and announces that Seymour will receive a trophy, and that she will return when the plant’s buds open. While Seymour and Audrey go on a date, Mushnick stays at the shop to see that Audrey Jr. harms no one else.

Mushnick finds himself at the mercy of a robber who pretended to be a customer earlier that day and believes that the huge crowds he was among at the shop indicates the presence of a huge amount of money. Mushnick tricks the robber into thinking that the money is with the plant, which crushes and eats him. When Seymour is forced to damage his relationship with Audrey to keep her from discovering the plant’s nature, he confronts the plant and asserts that he will no longer do its bidding. The plant then hypnotizes Seymour and commands him to bring it more food. He wanders the night streets and knocks out a streetwalker to feed Audrey Jr. Lacking clues about the mysterious disappearances of the two men, Fink and Stoolie attend a sunset celebration at the shop during which Seymour is to be presented with the trophy and Audrey Jr.’s buds are expected to open.

As the attendees watch, four buds open; inside each flower is the face of one of the plant’s victims. Fink and Stoolie realize that Seymour is the murderer; he flees from the shop with the officers in pursuit. He manages to lose them and make his way back to the now-empty shop. Grabbing a kitchen knife, Seymour climbs into Audrey Jr.’s maw saying, “I’ll feed you like you’ve never been fed before!” Later that evening, it is discovered that Audrey Jr. has begun to wither and die. One final bud opens to reveal Seymour’s face. He pitifully moans, “I didn’t mean it” and droops, apparently ending Audrey Jr.’s life. 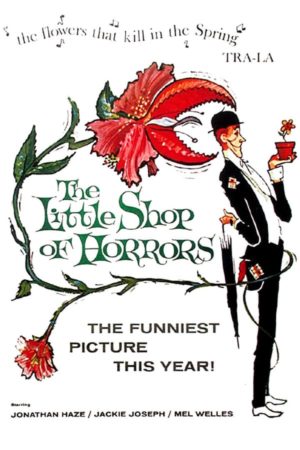