A scientist develops a youth formula for a cosmetics queen from jelly taken from queen wasps, failing to anticipate the typical horrible side effects.

The Wasp Woman (a.k.a. The Bee Girl and Insect Woman) is a 1959, independently made, American black-and-white science fiction-horror film, produced and directed by Roger Corman, that stars Susan Cabot, Anthony Eisley, Michael Mark, and Barboura Morris. The film was originally released by Filmgroup as a double feature with Beast from Haunted Cave. To pad out the film’s running time when it was released to television two years later, a new prologue was added by director Jack Hill.

Plot
In Hill’s prologue, a scientist, Dr. Eric Zinthrop (Michael Mark), is fired from his job at a honey farm for experimenting with wasps.

The founder and owner of a large cosmetics company, Janice Starlin (Susan Cabot), is disturbed when her firm’s sales begin to drop after it becomes apparent to her customer base that she is aging. Zinthrop has been able to extract enzymes from the royal jelly of the queen wasp that can reverse the aging process. Janice agrees to fund further research, at great cost, provided she can serve as his human subject. Displeased with the slowness of the results, she breaks into the scientist’s laboratory after hours and injects herself with extra doses of the formula. Zinthrop becomes aware that some of the test creatures are becoming violent and goes to warn Janice, but before he can reach anyone, he gets into a car accident. He is thus temporarily missing and Janice goes through great trouble to find him, eventually taking over his care.

Janice continues her clandestine use of the serum and sheds 20 years in a single weekend, but soon discovers that she is periodically transformed into a murderous, wasp-like creature. Eventually, Zinthrop throws a jar of carbolic acid at her face, and another character, using a chair, pushes her out of a high window, the impact killing her.

Be the first to review “The Wasp Woman” Cancel reply 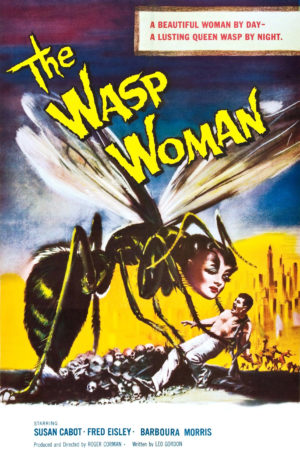